Articles
You are here: Home1 / Articles2 / Choosing a Coolant Skimmer for the Machine Shop 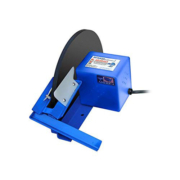 The use of an oil skimmer in the machine shop setting holds many benefits. Removing the oil from a machine coolant tank will initiate some esthetic benefits such as cutting down on the amount of smoke generated from the cutting tool coming into contact with oil laden coolant.

When a machine is shut down for the weekend, oil has a chance to come to the surface of the coolant tank. Bacteria that are living in the coolant tank use up the dissolved oxygen in the coolant mix, a process that is sped up by having a layer of oil on the surface. This allows odor causing anaerobic bacteria to thrive, giving off that familiar “rotten egg” smell.

Contrary to popular belief the common types of bacteria found in metalworking fluids do not cause dermatitis. However, if the skin is broken, bacteria that normally inhabit the skin may enter and cause infection. The presence of phosphates and carbonates that increase alkalinity in the coolant, however, can cause dermatitis. These impurities are found in the water being used in the coolant mix.

Separating the oil from the coolant will also help reduce disposal costs. The cost of disposing of oil laden coolant is more expensive than disposing of oil. In fact, in some instances, companies may be able to re-use the oil elsewhere or sell it for recycling. Having oil free coolant can also extend its usefulness and effectiveness, reducing the expense on maintenance and coolant replacement. As the research on the different types of oil skimmers begins, a person will find that there are a variety of skimmers available to them. The most common types are the belt, disk, and tube skimmers. Each type of coolant skimmer has its advantages and disadvantages.

There are also many factors that need to be considered when choosing the correct type of oil skimmer to fit the appropriate application. Factors such as water level fluctuation, water temperature, pH level, the use of rust inhibitors, the amount of oil to be skimmed, quality, and cost, must all be considered when selecting an oil skimmer.

The use of rust inhibitors, high temperatures, and variable pH levels can affect the skimmers ability to pick up oil. Most skimmer manufacturers use a variety of materials for the skimming medium such as plastic, stainless steel, or poly blends to match the solution in which they will be used.

There are a multitude of oil skimmers on the market today. One of the most important things to be considered is the quality of the unit to be purchased. Points of interest should include construction materials, motor design, and the type of warranty that is offered. Is the skimmer housing made of metal or plastic? Is the motor fan-cooled? Does the motor use needle bearings or bronze bearings? How long does the warranty last and what does it cover? Most oil skimmers will perform as advertised, but remember the old adage that “you get what you pay for”. 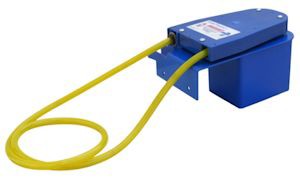 The tube skimmer works by mounting to the side of a coolant tank and running an endless, small diameter tube (typically tygon) in onto the surface of the coolant. The tube collects the oil and brings it back to the skimmer where it is removed and deposited into a proper disposal container.

Being able to mount this skimmer on the side of a machine coolant tank is this unit’s biggest advantage, allowing it to work where vertical access is not an option.

The biggest disadvantage is the minimal oil pick up rate (approximately 1 quart in 24 hours). An access hole must also be cut into the side of the coolant tank, which may cause coolant spillage. The cost of this unit is comparable to other coolant skimmers. 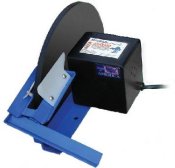 The advantage for using the disk skimmer is a slightly higher pick up rate (approximately 1 % gallons per hour in optimum conditions) than other types of skimmers. The other benefit is that it tends to be on the lower end of the price scale.

Some of the disadvantages of the disk skimmer are as follows: A large operating space is required for this unit. For example, a 24″ diameter wheel is required to reach a depth of approximately 12″. The pick up rate drops dramatically if the water level does not cover at least half the surface area of the disk, making it unsuitable in tanks where the water level does change. Standard plastic disks can not handle high operating temperatures (such as in parts washers), and replacement disks made of stainless steel tend to be expensive. 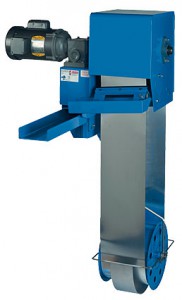 The belt skimmer works by mounting to the top or the edge of a tank and running an endless belt (made of plastic, stainless steel or poly material) into the tank. The belt is held in the vertical position by means of a motorized head pulley and free turning tail pulley. The belt travels through the surface of the coolant and collects the oil. The belt then passes through a pair of wiper blades where the oil is wiped off both sides of the belt.

Some of the advantages of using a belt skimmer are as follows. With its compact size, it requires very little operating space. Belt skimmers have good oil pick up rates (up to 2 gallons per hour, depending on belt width). This type of coolant skimmer can handle fluctuating coolant levels while still maintaining minimal operating space and maximum pick up capacity. Stainless steel is usually the standard belt material, making it capable of operation in high temperatures without added expense. The cost of the belt skimmer is comparable to other types.

There really are no disadvantages to using a belt skimmer over other types of skimmers. The pick-up rates are comparable or better than other skimmers and it is competitively priced.

In summary, when choosing the appropriate oil skimmer, the customer must take into consideration the application in which the oil skimmer is going to be used. Factors including tank size, access to the coolant, oil removal rates, and the other factors discussed above must be assessed to make the most appropriate coolant skimmer choice.

The Alternative to Pump & Treat

What is an Oil Skimmer?
Scroll to top