You are here: Home1 / Bobst Group

Any problem affecting the Ingersoll Master center in the Bobst Group’s Roseland, NJ, machine shop can effect the productivity of the entire plant. The center, which has a 50 hp spindle and handles workpieces up to 3 m x 2 m x 1m, machines a variety of components for the Bobst Group’s line of paper packaging equipment.

According to Kit Payne, maintenance section manager, the machining Center is a real workhorse. It runs two shifts a day, often operating for more than 20 hours at a time. Machining large plates and castings that require a lot of chip removal are all in a day’s work. The machine can take a 1/2″ deep x 8″ wide cut at a rate of 40 inches per minute. In one operation, a six-ton casting is reduced to just five tons.

Just as the parts it machines are huge, so too are the center’s coolant requirements. According to Payne, the center relies on an 800-gallon coolant sump. The steel tank measures about 5 feet square and 5 feet deep and is located within the machine’s foundation beneath the shop floor.

When the machine was installed in 1994, the initial charge of coolant lasted several months. But after that, a Charge would last no more than two months.

“After we replaced the first charge, there was a drastic change,” Payne said. “The coolant really started to deteriorate quickly.” In addition to acquiring a rancid odor, it often became gummy. The machine also began snapping taps at a very high rate. “We wouldn’t get three holes out of them and they would break,” Payne said. The taps were especial1y vulnerable because the tapping operation requires the coolant to lubricate the tool in addition to dissipating heat.

The cause of the deterioration was a thin layer of oil which formed on top of the coolant while it was in the sump. Possible sources of the oil included way lube, minute leaks in the hydraulic system, and the natural deterioration of the coolant itself, in which the vegetable and mineral oils that make up the coolant separated from the water. The oil prevented oxygen from mixing with the coolant and allowed anaerobic bacteria to thrive. The bacteria then caused the coolant to break down even more. 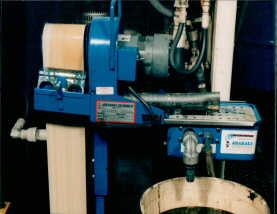 Losing the machine for a day was a big blow. “If you’re doing that every two months, that’s a lot of production time that goes down the tubes,” Payne said.

Bobst then tried using a shop vac to suction the layer of oil off the coolant. “We noticed that the coolant was improving a little bit,” Payne said. “But, our oil consumption problem wasn’t going away. We were still using a lot of coolant because you wind up taking out a lot of coolant along with the oil. It’s self defeating.”

A Solution That Works

At this point, Payne decided to install a Tote-It Portable Oil Skimmer with a 4-inch wide belt and an Oil Concentrator from Abanaki Corporation, Chagrin Falls, OH. The coolant skimmer’s belt operates on a motor and pulley system attached to a stabilizer bar that is immersed in the coolant. 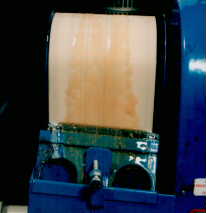 Note the oil clinging to the belt.

The Tote-It coolant skimmers make use of the differences in specific gravity and surface tension between the coolant and the oil. These differences allow the belt to attract oil from the surface of the coolant. After traveling over the head pulley, the belt passes through tandem wiper blades which scrape oil off both sides of the belt. The oil is then discharged through a 1-1/4″ ID hose into the concentrator.

The concentrator utilizes gravity to separate the oil from the small amount of coolant that is picked in the skimming process. The separator ensures virtually complete oil/water separation1 allowing the coolant to be returned to the system.

Since installing the coolant skimmers, Payne reports that a coolant charge now lasts at least six months. As a result, coolant replacement costs and machine downtime have been reduced, as has the cost of replacing taps. Based on the skimmer’s performance, Payne recently installed two Abanaki Mighty-Mini Portable Oil Skimmers on the shop’s horizontal boring machine and vertical machining center.