You are here: Home1 / Nickco Recycling 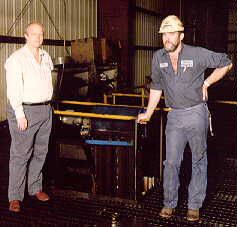 Originally a recycler of scrap metal, Nickerson saw a need for safely salvaging the mountain of used oil filters discarded each year in this country. So, in 1992, he developed his own proprietary process and created a business to recycle oil and filters. Nickerson’s process involves three distinct steps: crushing, heating and oil skimming.

Today, Nickerson’s company handles some 50,000 used oil filters every day and recovers up to 800,000 gallons of waste oil annually. In addition to oil, the steel, rubber and paper components of the filters are also recycled. Nickerson describes the process as “One waste stream in and three reusable material streams out.” In addition to the obvious benefits to the environment, recycling used oil filters saves money, reduces the country’s dependence on foreign oil supplies and puts scrap steel back into production.

Then the crushed shells are loaded into a box car-sized furnace where they are heated to 500°F for up to 14 hours. This part of the process releases the remaining oil. At the same time, the paint is burned off the metal which will be sold for scrap. The rubber gasket and paper filter element are reduced to a usable residue which is shipped to area power plants where it is mixed with coal and burned to produce electricity.

The heated oil drains from the furnace into a water-filled pit where oil skimming removes the excess oil off the surface and routes it to a holding tank for pickup. The water-filled pit is critical to the recycling process. Not only does it collect the bulk of the used oil, but water drawn from the bottom of the pit is used to cool the furnace during the few hours it takes to load and unload a batch of filters. To perform the function efficiently and safely, the water must be relatively free of oil contamination.

“At first,” says Nickerson, “we used a suction hose to skim the oil off the surface. We quickly realized this method was too time consuming, messy and inefficient. Either too much oil remained in the water or we sucked up too much water with the oil when the oil film thinned.” Nickerson felt “There’s got to be a better way!” That’s when he turned to Abanaki Corporation’s Oil Skimming Division for a solution.

In place for over two years, the Abanaki Oil Grabber Model MB uses two 8″ wide belts and stationary wiper blades to skim the water surface to remove up to 200 gallons of oil per hour. The unit is critical to the recycling process and, according to Nickerson, “attracts a lot of attention from regulators and legislators from Texas and other states who regularly tour” the plant to learn more about the benefits of oil filter recycling.

“The unit is virtually maintenance-free and it operates 24 hours a day, 7 days a week” says Nickerson who plans to purchase two more Abanaki skimmers when he completes a million dollar expansion to double his capacity to 100,000 filters a day.