You are here: Home1 / Rosemont Industries

The origins of mass finishing can be traced to biblical times and the use of tumbling barrels. Today, vibratory finishing has emerged as one of the most popular finishing methods and manufacturers across a variety of metallic
applications rely on leading providers such as Rosemont Industries in Cincinnati, Ohio.

For decades, Rosemont has provided high quality metal finishing services at affordable prices to its broad base of local, national and international customers. The company’s full range of vibratory finishing services includes new and refurbished equipment for deburring, edge breaking and polishing; media and compounds for parts separation and finishing; and a job shop for customized finishing work.

The Process of Perfection

For those applications where the finish must be “perfect” – with no visible blemishes or defects – Rosemont offers a black oxide process. “Products known for their metallic luster such as costume jewelry and guns rank among the most popular end uses for black oxide finishing,” Scott Majors, Rosemont’s President of Operations, explains.

The process requires parts to move through several stages. First, they are polished in the facility’s vibratory finishing system using ceramic media. After polishing, the parts go through an alkaline cleansing process followed by a counterflow rinse. This allows Rosemont to remove buffing compounds and manufacturing residue such as oils and grease. Next, the parts proceed into Rosemont’s 68-gallon black oxide bath in the facility’s 16-foot tank and then are run through ambient rinses. The final step is immersion in soluble oil that provides corrosion protection and enhances the appearance of the blackened parts.

Although a black oxide finish is highly valued for its final results, the process has come under increasing scrutiny from regulatory bodies such as the U.S. Environmental Protection Agency (EPA). In recent years, the EPA has focused on service shops that use harsh chemicals, concerned that oily wastewater could find its way into local drinking water. Leading finishers like Rosemont have taken a proactive position for wastewater recycling as a result.

“We know we need to be particularly vigilant in how we handle the wastewater from the cleansing stage where oil and other contaminants are removed from the parts. The water flows through a batch discharge and mixes with wastewater from the entire plant, so we have to be sure tramp oil from this operation won’t leak into any other area of operation or, of course, out into the surrounding community,” Major says.

Majors also reveals that Rosemont needs to be mindful of the escalating costs associated with a shortened washer fluid life due to oils as well as the rising costs of disposing of the contaminated fluids. 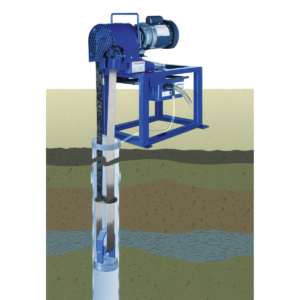 More than six years ago, the facility was able to use an internally designed and built skimmer to remove contaminants from the wastewater but as local and federal regulations tightened and costs began to skyrocket, Majors began to research other solutions. He found Abanaki, a worldwide leader in oil skimming solutions, through one of their customers.

“We had the chance to tour a customer facility and saw the Abanaki name on a skimmer in use there. They were quite pleased with its performance and said Abanaki was the best in the business, so we call the headquarters outside Cleveland and the company sent a representative down to meet us, ” Majors says.

According to Majors, the decision to call Abanaki was a good one. After analyzing the operation and discussing Rosemont’s specific needs, the decision was made to install the belt oil skimmer the PetroXtractor.

In general, belt oil skimmers work because of the differences in specific gravity between oil and water which causes oil to float to the top of the water where it can be removed. The special belt material breaks the surface tension of the water to attract and collect the floating oil. The belt passes through a set of wiper blades via a motorized head pulley where the oil is wiped off both sides of the belt. The oil then flows through the skimmer troughs and into a proper disposal container.

The PetroXtractor by Abanaki Corporation offered Rosemont several unique advantages over other choices. Its single unit design separates oil and elevates it up to 100 feet without a pump. It has a tethered tail pulley to prevent accidental belt loss, and it is designed to skim very little water, even with fluctuating water levels. This was an important consideration at the facility, since levels fluctuate often, with different shifts handling different production capacities.

In addition, factors such as variable pH levels and the use of rust inhibitors – both present at Rosemont – can affect a belt oil skimmer’s ability to pick up oil and may require a specific skimming medium.

“Very early on, we experienced some problems with the belt as we often use some very harsh chemicals,” Majors acknowledges. “But all we had to do is call Abanaki and they sent someone down right away to assess the situation. Then they customized the belt material to fit our needs. All in all, the service response was excellent.”

Low initial cost and even lower maintenance are two common benefits of an Abanaki skimmer. The only required maintenance is replacing a belt and wiper blade set as needed and there are no filters to change. And the PetroXtractor, while boasting a pick-up rate of up to 16 gph, requires very little operating space with no tank modification.

“We have been very pleased with the Abanaki unit. It consistently pulls the right amount of material we need to stay in compliance and takes up very little room. From the time it was installed over six years ago in a corner of the plant, it hasn’t required any special attention and it works great,” Majors concludes.