With it’s patented design, the Tote-It oil skimmer is a dependable and effective means of removing oil from water. The single assembly unit can be used in any application where 115 VAC, 60 Hz power is available.

The Tote-It belt oil skimmer utilizes a continuous belt and wiper to remove up to 12 gallons of oil per hour from the fluid surface. The belt operates on a motor and pulley system attached to a stabilizer bar that is immersed in the contaminated liquid. After traveling over the head pulley, the belt passes through tandem wiper blades where oil is scraped off both sides of the belt, and discharged through a 1-1/4 in. ID hose. The tail pulley has flanges which allow it to roll freely on the inside of the belt without becoming dislodged. It does not need to be fastened to the tank.

Oil skimming makes use of the differences in specific gravity and surface tension between oil and water. These physical characteristics allow the belt to attract oil and other hydrocarbon liquids from the surface of the fluid.

The Tote-It belt oil skimmer is especially well suited for parts washing and machining center applications. By removing surface oil from a wash tank, the parts will not be recontaminated as they are withdrawn. Removing tramp oil from a coolant tank prevents excessive smoke and fumes due to oil burning during cutting operations. It also reduces bacteria growth in the tank, along with the resulting odor.

Will Your Oil Pick Up? Request belt and tube samples to find out. 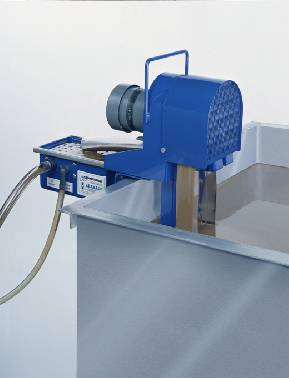 Rugged Construction for Harsh Conditions: The Tote-It belt oil skimmer has been designed to last for many years. Belts are specifically selected for your application (see Belt Selection page). A tough power train keeps the Tote-It running under the most severe conditions. With the proper configuration the Tote-It can handle liquid temperatures up to 212 F, and the pH of the fluid can range from 3 to 13.

Where to Use the Tote-It Portable Belt Skimmer

The Tote-It is designed for those applications where multiple tanks can take advantage of a single portable unit. It also can be used in permanent installations with limited access areas, such as small parts washers and machining center coolant tanks. Typical applications include: