Six months ago Tom Zovko, owner of Cleveland, OH-based Z&Z Manufacturing, a producer of hydraulic fittings and special screw-machine products, couldn’t see across his 15,000 sq. ft. machine shop. The smoke generated by his CNC machining operations was not only polluting the environment but consuming much of his profits. That’s when Zovko contacted Abanaki Corp. for a solution.

The company’s machines use way-lube oil to prevent rust and ensure smooth operation, and a coolant for easy cutting at high speeds. Engineers had just one problem: With the oil and coolant concentrated in the same area, the end result was a smoke-filled atmosphere that was unsafe for workers and violated EPA regulations.

Zovko tried changing the coolant daily in an attempt to separate the lubricant from the coolant. This didn’t work, and it cost Z&Z thousands of dollars in CNC coolant, downtime and labor charges.

Already What to do? Try tested technology. successfully operating the Abanaki Mighty Mini in his machine shop, Zovko decided it was time to add another. The CNC machine skimmer’s belt is operated by a motor and pulley system that keeps it in motion whenever the unit is activated. The design uses the difference in specific gravity and surface tension between oil and water to pick up oil, grease and other hydrocarbon liquids as the belt passes through the wash water. 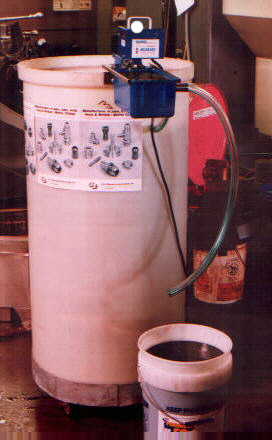 The CNC machine coolant skimmer’s belt runs over a tail pulley connected to a stabilizer bar that is lowered into the wash water. After the belt passes over the drive pulley, it travels through tandem wiper blades where the oil is removed through a discharge channel.

A test of the Abanaki unit proved that oil skimming could extend Z&Z’s CNC coolant for several weeks and could rid the shop of heavy smoke. “Abanaki brought in a demo unit, made suggestions on the most efficient way to use the product, and said if we weren’t completely satisfied we wouldn’t have to pay.” Zovko tells Metlfax. One week later I told them to send me the invoice.”

The Mighty Mini weighs only 7 lbs.,allowing it to be carried to different locations as needed. The unit, which has a footprint measuring less than 5″ X 7″, is quickly installed

through a 2″ diameter bung hole in a drum using an optional bracket.

Zovko adds, ” Since installing the Abanaki unit, we’ve increased the life of our coolant and the life of our tools, saved on maintenance and EPA costs, and we have been able to breath a whole lot easier.”