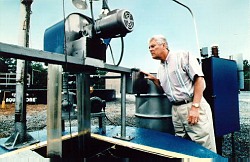 Golden West Foods’ (GWF) circulating water system picks up more than 200 gallons of frying oil every day. The oil enters the wastewater drains during sanitary washdowns. This oil sediment plugs bends in the piping that returns oil to the fryer filter. This sediment – causing oil overflows – comes from the the coating on products such as onion rings and French toast made at the company’s Bedford, VA plant.

To keep the plant’s water system in peak condition, the oil must be removed continuously. When done effectively, this oil can be reclaimed and sold for various uses. GWF has found that one of the most effective methods of removal is a belt skimmer from Abanaki Corporation, according to Chuck Tucker, maintenance manager with GWF.

Until 1973 GWF was using a floating suction skimmer powered by a pump with over 300 gallons per hour capacity. This high suction rate resulted in a great deal of water in the skimmed product, thus lowering its salvage value.

After screening large debris and passing through an intermediate storage area known as the wet well, the contents are pumped into the plant’s 100,000 gallon equalization tank that provides a buffer for the waste treatment plant. “This tank held the floating suction skimmer previously used,” says Tucker. “The skimmer frequently became clogged, so it was impossible to leave the unit unattended.”

As a result of these problems, the company installed an Abanaki Model 8 Oil Grabber. This unit can remove up to 40 gallons of oil per hour – more than enough for the oil washed off during the plant’s three-shift operation. The wet well was selected as the installation site because there is adequate dwell time to allow thorough separation of the oil and water. The belt skimmer works on the principle of surface tension. Oil and other hydrocarbon liquids are picked up as the belt passes through the surface of the contaminated liquid. After traveling over the head pulley, the belt passes through tandem wiper blades where oil is scraped off both sides and discharged.

“We selected the Abanaki unit because of its reliability and low maintenance which allows continuous unattended operation,” says Tucker. “Other separation technologies are effective, but most are more complex than skimming.”