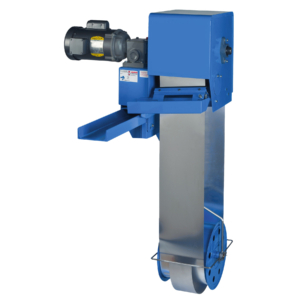 The Model 8 oil skimmer can remove oil at a rate of 40 gallons per hour. These units can also be fitted with accessories such as heaters, debris rakes, and belt and tail pulley tethers.

Graham Smith, a sales engineer for the UK division of Abanaki Corporation, Oil Skimmer Division, headquartered in Chagrin Falls, OH, was called upon by a large Japanese automaker with operations in Europe to solve a unique problem—retrieving automotive wax and reclaiming water at the end of an extremely busy production line.

The engineer discovered a unique situation. At the end of the automaker’s two, 24-hour-a-day production lines, manufacturing 500 cars per eight-hour shift, newly made automobiles were being sprayed with a fine mist of wax, which served to protect the cars during shipment. The problem was that the wax overspray which dripped into wax bay holding sumps was poorly retrieved by obsolete skimming equipment. The automaker was sacrificing time and money at the hands of aging, labor-intensive equipment that offered poor removal rates.

The wax removal system in place consisted of a drag-out unit using a chain-link conveyer. These link belts were supposed to collect the excess wax and drop them into a collection container. This process had many faults. For starters, the unit cost approximately 15,000 GBP and did not perform as promised. Another problem was that the collected wax was so sticky and hardened so quickly that it would not easily come off the belt. As a result, wax that collected on the grates had to be removed manually two or three times a day, adding cost and inefficiencies to the wax removal system.

A custom-designed oil skimmer fixed the problem. It consisted of a modified belt-driven oil skimmer manufactured with specially designed heaters, wipers, belts and accessories. Oil skimmers are simple, dependable, and effective tools for removing oil, grease, and other hydrocarbons from water. Often, an oil skimmer by itself can achieve the desired level of water purity. In more demanding situations, skimming is a cost-effective means of removing most of the oil before using more complicated and costly treatments such as coalescers, membrane filters, and chemical processes.

Although designs vary, all oil skimmers rely on specific gravity, surface tension, and a moving medium to remove floating oil from a fluid’s surface. Floating or sinking oil and grease cling to skimming media more readily than water. This allows skimming media in the shape of a belt, disk, or drum to pass through a fluid surface to pick up oil and grease with very little water. This oily material is subsequently removed from the media with wiper blades or pinch rollers.

The pick-up unit designed for this application uses infrared heaters located in the rear of the skimmer, overhead convex heaters, and heated chutes designed to soften the automotive wax, making it easier to separate from water. The wax goes into two specially designed removable wax receptacles.

The stainless steel belts are operated by a motor and pulley system, which keeps them in motion whenever the unit is activated. The design uses the difference in specific gravity and surface tension between oil and water to pick up wax, oil, grease, and other hydrocarbons as the belt passes through the wash water. The belt travels into the wash water, picking up the wax as it passes through. It then travels through an infrared heater hood and is then scraped of the wax by tandem wiper blades. The wax then tumbles into the wax receptacles.

The hard, abrasive construction of the ceramic wiper blades offers more efficient removal rates than standard wiper blades. Different wiper blade materials are appropriate for a variety of operating environments. The standard material is Nitrile (also known as Buna-N), which is appropriate for about 80% of all applications. Optional materials are designed for applications with harsh operating conditions. The materials include: CRV (very high chemical resistance), ceramic hybrid (excellent lubricity and moderate chemical resistance), and ceramic (high chemical, heat and grit resistance).

According to the automaker, the new custom-designed oil skimmer solved a problem that units costing 10 times as much failed to solve. The end result is that wash water life has been extended by several weeks and spray nozzles are no longer getting plugged by wax.