You are here: Home1 / Quaker Oats

The Quaker Oats plant in Peterborough, Ontario, Canada produces some seven million cases of Harvest Crunch® cereal and cake mixes annually. In the process, residue from the conveyors, dryers and other processing equipment ends up on the floor. Periodic equipment washdowns add water to the solid and liquid residue, which contains edible fats, starches and sugars. During house-cleaning operations, this liquid slurry flows into wastewater collection channels below the floors, and through a pipe that carries it to settling tanks in the basement of the 6-story plant. Since the wastewater flow can cover a wide range of rates, two settling tanks are needed to accommodate large surges.

[In 1993] Quaker was treating this waste stream by simply suctioning off floating oil and solids from behind weirs on top of the settling tanks. Below the surface, water was decanted into a line leading to Peterborough’s sanitary sewer system.

Although simple, this treatment process was scarcely cost effective. A major expense associated with disposal of the semi-solid residue was the cost to have it hauled away and discarded in a landfill. This cost ran into six figures annually. Then officials from the Peterborough waste treatment plant told Quaker that the BOD content of their wastewater stream was excessive. In particular, oil levels exceeded the 15 ppm guidelines, which resulted in a sewer tax of $127,000 (Canadian). With total disposal costs adding up to more than one-quarter million dollars annually, Quaker began looking for better alternatives.

Quaker’s Plant Engineering Department was assigned the task of developing a lower cost disposal method for this waste stream. The need to separate water, oil and solids was clear. The challenge was to select equipment that was cost effective in terms of both original cost and operating expense, which did not create major maintenance
problems itself.

The plan that ultimately developed was to install 100-mesh (150 micrometer) screens to remove solids upstream of heated settling tanks, and install oil/water separation equipment in the tanks themselves. Heating the tanks helps promote faster separation of oil from the water. Both screening and skimming contribute to lower BOD, and this arrangement minimizes problems caused by solids fouling the separation equipment. Although a number of separation technologies could work, the one finally selected was belt skimming, because of its simplicity and cost effectiveness. 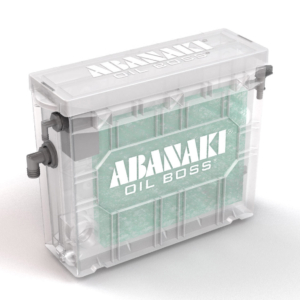 Quaker’s subsequent search for a suitable separator led to Abanaki Corporation, a Chagrin Falls, Ohio firm that makes belt oil skimmer equipment. Abanaki manufacturers the Oil Boss®, which utilizes 304 stainless steel construction and removes up to 20 gallons of oil per hour. To handle the large influx of oil during Quaker’s house-cleaning operations, two skimmers were installed in each settling tank. By using two tanks, there is a backup if one system is taken out of service for maintenance. The total cost to add screening and skimming equipment to both tanks was about $17,000 (Canadian).

Operation of the System

Each settling tank allows enough quiescent time for thorough separation of oil and water. This is important because the Abanaki belt oil skimmer unit has a continuously moving belt that relies on free-floating (not emulsified) oil to work effectively. The difference in surface tension between water and oil is what imparts oleophilic properties to the stainless steel belt, which means it has more affinity for oil than water.

The stainless steel belt operates on a motor and pulley system that pulls it through the contaminated water surface where it picks up oil and fats. The fractional horsepower gear motor is totally enclosed and fan cooled. Various voltage options are available, as well as Food Grade Service options.

After traveling over the head pulley, the belt passes through tandem wiper blades where oil is scraped off both sides of the belt and discharged into a container. The tail pulley has flanges that allow it to roll freely on the inside of the belt without becoming dislodged. It requires no bearings and does not need to be fastened to the tank. A tether and cage assembly prevents the tail pulley from being dislodged and lost in the tank. Belt length is customized to make sure it stays in contact with the fluid surface at its lowest possible level.

Quaker approved the Abanaki belt oil skimmer because of its reputation for high reliability, low maintenance, and minimal operator involvement, which allows unattended operation. The only routine maintenance required is to clean and adjust wiper blade assemblies every 2 or 3 days, a job that takes only a few minutes. Occasionally, a skimming belt may need to be replaced. Other features that attracted Quaker’s attention were:

Shortly after installation of its new separation equipment, Quaker’s wastewater stream was tested by the city of Peterborough and found to contain less than 3 ppm oil. This resulted in the plant’s tax bill being reduced to $48,000, a savings of $79,000 (Canadian) annually. Although sewer taxes subsequently went up for everyone in Peterborough, Quaker still enjoys substantial savings.

Equally important, Quaker’s disposal costs for solids and oil have been virtually eliminated. By recovering edible oil with low water content, it can be mixed with the separated solids and sold to a bakery salvage company. With minimal processing, this mixture can be sold as swine feed. The price paid by the salvage company more than pays for the cost of shipping the residue to them, and there are no landfill costs.

After three years of experience with the Abanaki Oil Boss, Quaker has concluded that belt oil skimmer technology is the best one for the Peterborough plant. Skimmers with drum, disk, mop, and tube configurations might have worked, but they did not seem to offer as many advantages as a belt skimmer. Although other oil/water separation technologies are effective, including coalescing, membrane separation, and various chemical treatments, most are more complex and more expensive than skimming. Also, some of these methods do not easily handle the volume of oil that skimming does. The bottom line: belt skimming is a cost effective way to lower oil concentration to only a few parts per million.