To a precision metal tubing manufacturer producing a product that meets precise tolerances is not good enough. Keeping customers satisfied also means the tubing must be free of any residue from various chemical solutions used during fabrication.

Having a wide variety of customers, their products can be found in many applications. From automobile rocker arms and cam shafts, to lawn and garden equipment, and as magazine tubes on rifles and shotguns. For each application, a close tolerance, clean, residue-free tube is delivered.

Keeping the tubes free of chemical residue is challenging.

After arriving at the plant, the stock is degreased and placed in a dip tank containing sulfuric acid. It is then coated with zinc phosphate, drawn, machined and degreased a second time in a sodium hydroxide solution. Finally it is neutralized in an alkali bath and protected with a synthetic oil coating to prevent rust.

The combination of oil, water and chemical residue presented a unique challenge. It is critical that the chemical residue does not move downstream from one dip tank to another. During the process, chemical residue floats on the surface of the tanks, oil is in the middle and water on the bottom.

To remove the residue, employees would hand skim the tanks when the plant was shutdown on weekends. Hand skimming was messy, time-consuming, costly and inefficient. It never allowed for an effective separation of the oil and the chemicals. It was not possible to recycle “clean” oil back into the process.

Looking for an alternative, the decision was made to install the Tote-It® Portable Oil Skimmer from Abanaki Corporation on a trial basis. The oil skimming Tote-It utilizes a continuous belt and wiper to remove up to 12 gallons of oil per hour from a liquid’s surface.

The 4″ wide oil skimming belt operates on a motor and pulley system. The system is attached to a stabilizer bar that is immersed in the liquid. After traveling over the head pulley, the belt passes through tandem wiper blades where oil is scraped off both sides of the oil skimming belt. The oil is discharged through a 1-1/4″ ID hose. 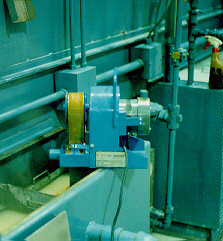 Mounted in a wastewater recovery tank

The oil skimming effectiveness rests in the differences in specific gravity and surface tension between oil and water.

These characteristics allow the belt to attract oil and other hydrocarbon liquids from the fluid surface.

The switch from manual to mechanical oil skimming resulted in immediate benefits. Dip tanks were cleaner with much less residue carry-over from tank to tank. This eliminated the need for weekend overtime for hand skimming. Material costs and downtime also reduced, since the oil is recycled longer and tanks need to be drained and refilled much less often. Finished product quality has improved, resulting in greater customer satisfaction.

Today the tube manufacturer has earned ISO 9000 certification. The mechanical oil skimmers have played a key role. The skimmers have become an important part of the plant’s quality control process.