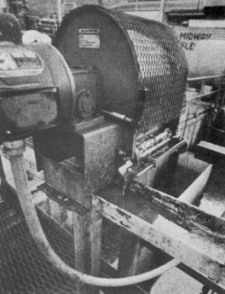 Head pulley drives belt without interfering with removal of oil from both sides of belt.

Worldwide, Reichhold Chemical Corp. produces some 5600 products. At St. Helens, Ore., they produce three -urea, ammonium nitrate and ammonia. Plant drain water is discharged into the Columbia River, and although oily residues are minuscule, removing oil from water is a high priority to keep drippage from ammonia compressors, vehicles and machine maintenance chores.

Although the amount of oil in drain and stormwater is not high, both plant and regulatory officials want as close to zero discharge of oils as possible. Removing a minute concentration of oil effectively is a challenge, however.

All plant drainage, washdown and storm waters are channeled through floor and street drains into a two-compartment API settling chamber which is also used for collecting other oily residues at the plant such as crankcase oil. The oil is given time to rise in a sump, and is periodically drawn off by an 8″ wide stainless steel belt at a rate of 32 gal/hr. Wiper blades continuously remove oil from both sides of the belt. Oil is then transferred to a holding tank.

A second skimmer is used in a sump that drains only the urea plant. Here, process water is cleaned of oil by the skimmer, then reclaimed in a steam stripping concentrator for reuse. Again, the volume of drippage oil that gets onto floors is small. During heavy rains, runoff into this sump can be diverted to the API channel for further treatment.

Oil skimmers fill a need for effectively removing oil from water, even small amounts of oil from drain water. Only a few gallons are collected every two months from this source – but zero oily discharge makes Reichhold a good neighbor in an environmentally conscious neighborhood. Oil skimmers require little maintenance time compared with the alternative route of constructing plant-made hose or belt skimmers.